A few weeks ago, I took my friend out for his birthday. I’d organised to head to a free ‘Symphony Under the Stars’ concert. Before you accuse me of taking him out on a cheap date for his birthday, here’s the deal – I did the planning and brought along a sensational picnic dinner (OK, this was mostly “sourced” rather than cooked).

Sometime into interval, after the scrumptious dinner, I surprised him with the cutest double decker mini chocolate cake ever (this was homemade!). He was pretty chuffed, but then, knowing me as he does, his expression changed to fear, and he asked, “You’re not going to sing Happy Birthday loudly and embarrass me are you?”. I responded by singing Happy Birthday very loudly and encouraging those around us to join in, which they happily did. At just that instant, the orchestra had commenced their post interval warm up. I began to notice that their cacophony of warm up noise was morphing into some much nicer sounds… and so it was that the entire audience, accompanied by the 70 piece symphony orchestra sang Happy Birthday to my friend.

You guys know by now that this is going to be a story about Agile – right? In my team, we are making a bit of noise. When we’ve completed a story, the person who does the finishing, gets to have a turn on our very own toy xylophone to announce, in the most pleasant of ways, that another story is in the “done” column.

Halfway through last sprint, I noticed that we were well on the way to completing everything we’d committed to in the sprint. I felt that this called for a soundful acknowledgement, so during our standup the finale of the 1812 overture filtered through the office, complete with cannons. Was this disruptive? Well quite possibly, but all for the right reasons. It probably made people wonder what wonderful thing had happened. It probably also made some people want to get with the team that’s having the most fun!

It was however, pretty apparent to me after the 1812 overture incident, followed by Parrell Williams’ Happy and Alex Lloyd’s Amazing, (when we did complete all the stories in the sprint), that the team was finding my musical taste a bit eclectic (read “only suitable for those over 40”). I countered with a competition to supply some music we can use when we are happy, excited, kick some goals, or finish a nasty story. Hinting at a past spent in too many 80s dance clubs, one team member came back to me with the sounds of an all-night party mix of Sing hallelujah, Such a good feeling and Ride on time! 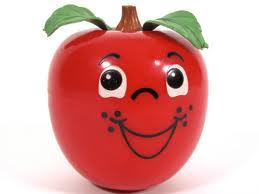 Our other sound is that of our cheery faced 1970s retro toy – Happy Apple. When you tap him, he emits a very soothing chimey sound. Having brought joy to a couple of generations of kids in my family, his goofy face is now bringing cheer to generation digital. Happy Apple has been making some noise as he makes his way around the team as a way of acknowledging when someone shows great agile-ness.

And so back to symphony orchestras. There’s probably no need to panic that they’ll be playing in my workplace any time soon. What is happening though, is that the sound of Agile, like that of Happy Birthday, is getting us to celebrate, collaborate and get the job done. 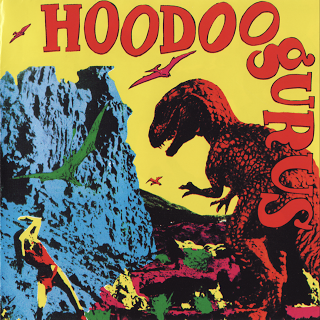 A few days ago I happened upon the iconic album cover from the Hoodoo Gurus 1984 album Stoneage Romeos. Initially a cult inner-city act, their popularity expanded due to regular airplay on radio station Triple J and nationwide pop TV show Countdown.

I had organised a field trip for my team to the offices of accounting software company MYOB, to see Agile product development in action. There in the groovy breakout space was the cover image of the “Gurus” first album. Let me be perfectly clear here, back in the eighties when I followed the band around the pub circuit, I wasn’t imagining that thirty years later I’d relate their meteoric (in my mind only) rise to fame with Agile product development methodology!

It did get me thinking though, that just like Agile methodology, the Gurus were a bit out there. Agile emphasises business people and developers working together daily throughout a project. Likewise, it recognises that the most efficient and effective method of conveying information to, and within a development team, is face-to-face conversation.

On our field trip to MYOB, we saw these principles in action where about four standups were being conducted simultaneously, with Developers asking Product Owners questions about features, and confirming how they could drive forward their activities for the day. The sound in the large open space office area was that of people involved in face-to-face conversation.

As visitors to MYOB, the team unanimously commented on the passion shown by the Scrum Masters who hosted us on our tour. It turns out that it isn’t just a principle in the Agile manifesto to build projects around motivated individuals and give them the environment and support they need, and trust them to get the job done! We saw it in action.

True, the Hoodoo Gurus had a different sound to other eighties rock bands that had come before them, but championed by radio station Triple J, their non-mainstream sound took hold. In my organisation we are amongst the first teams adopting Agile. It means that we are doing things a bit differently to satisfy our stakeholders through early and continuous delivery of valuable software.

When inducted into the 2007 ARIA Hall of Fame, the announcement stated that the Gurus were one of the most “inventive, lyrically smart and exciting” bands from Australia. “Inventive”, “Smart” and “Exciting” – sounds a bit like Agile to me.

I was recently beyond excited to hear that the Minions are set to star in their own film, a spin-off/prequel to the 2010 Despicable Me and 2013 Despicable Me 2.

In case you haven’t seen these movies, Minions are yellow henchmen who have existed since the beginning of time, evolving from single-celled organisms into beings who have only one purpose: to serve history’s most ambitious villains. So admittedly, they are driven by serving evil, but their industrious cuteness is what won me over from the very beginning, and continues to make me laugh every time I see their silly one or two eyed selves.

Minions were also the stars of  my team’s recent training. The focus of the workshop I put together was on understanding roles within an Agile context. It’s best explained by picturing an Agile team sitting in a room (of course if you picture the team as Minions, there’d be no sitting!).

The Product Owner would be nearest the door, because he/she spends a lot of time outside the room talking to stakeholders to define the product/initiative and to prioritise features. The Product owner is always available at standups to listen to the Developers and communicate the product vision.

The Scrum Master might be close-ish to the door too, because in the most diplomatic but firm way, he/she wants to ensure that the Development team is free of (admittedly well intentioned) disturbances from outside the team. The Scrum master is always at standups, checking the choreography of the event and keeping one eye on the Agile card wall to encourage the whole team to commit to pushing stories through the sprint. The Scrum Master is the team’s cheer squad.

The Development team would be further inside the room, so that they can get on with what they need to be doing – building the asset. By arrangement, the Product Owner and Stakeholders are invited to sit with the Developers for walkthroughs. The Developers always feel they can catch up with the Scrum Master about in sprint activities or obstacles. Likewise they feel confident to seek product decisions from the Product Owner.

Suffice it to say that in the Minions’ world everything has a happy ending. Translating this into Agile terms – assets are delivered on time, with the features our stakeholders and users need and want, and the team has a bit of fun along the way!

My web team are used to getting some crazy requests for resolution, but this one was weirder than the average digital project we work on.

Eager to take a collaborative and effective approach to managing digital content development, we are in the throes of introducing Agile methodology. We kicked this off with a workshop that saw us creating a comic book of Goldilocks and the Three Bears. This fun exercise is based on Mark Levison’s Learning Scrum Through Games.

The exercise is a fabulous way for a team to experience Scrum ceremonies, practices and roles, from the ground up. I acted as Product Owner and provided the team with the following unprioritised backlog:

The team were given the following schedule for a two day sprint. They needed to complete the comic book in two sprints:

After the team ran through the first sprint, as Product Owner, I explained that there was another story that I desperately needed to add to the backlog: As a child, I want to see a page in the book that shows what the bears were doing while they were out, so that I can once and for all know what they were up to when they left their house unattended and unlocked that morning!

The exercise was fantastic fun and the learning outcomes were similar to those that Mark Levison reported:

Most importantly, the team learnt that Agile values satisfying the customer though early and continuous development.

I’d love to hear other Agilists experience at having a go at this exercise, or getting a team up and running. My team were really fired up from the activity, and the very next day we put it into action with our actual backlog.